For those of you who know me well, you know firsthand that my work means the world to me. I’m passionate about all the different hats I wear, and I’m proud to say that I give everything in my life 200% all day, every day. However, that wasn’t always the case.  It was definitely difficult getting here mentally and emotionally, but I wouldn’t trade it for anything because it’s shaped me into the woman I am today.  So, without further ado, let’s talk about how to be a girl boss! 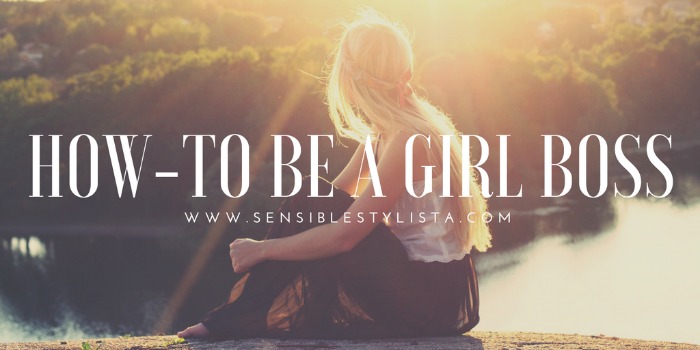 1.  “Be fearless in the pursuit of what sets your soul on fire.”

When I was growing up, I had a lot of big opportunities come my way, but I would often self-sabotage.  I’d try, but I wouldn’t try my hardest so if I had failed, it’d be because I didn’t give it my all. It was a way for me to protect myself and my pride – I mean, looking back at it now, I honestly can’t think of anything stupider, but it made sense to me back then.

We’re human so it’s natural to fear failure.  No one wants to mess up or be rejected, but you won’t move forward unless you put yourself out there.  Take advantage of whatever opportunity comes your way, but don’t sit back and wait for them to come knocking at your door. I hear so many people complain about others and their successes.  “That guy totally didn’t deserve that position” or “how did SHE book that concert” or “how is that blogger working with that company, she’s not even that pretty.”  Girl bosses don’t think that way.

If you don’t like where your career’s at, do something about it.  Get out of your comfort zone.  Go meet people and make genuine connections.  Ask for help!  Pitch collaborative ideas to brands, artists, or whoever/whatever’s applicable.  The worst you’ll ever hear is “no,” and trust me, it won’t kill you.  You have absolutely nothing to lose and everything to gain.

Grit is everything.  We all know the story about the tortoise and the hare.  Slow and steady really does win the race.  When I was in college, I used to work in spurts.  I’d feel super motivated one day and pull an all-nighter working on a project, only to wake up late the next, feeling too groggy to function.  It’s better to do small amounts daily rather than binge-work, especially if you’re working towards a long term goal.  For example, if you want to run a mile in 7 minutes or less, you’ll need to schedule jogs several times a week for an extended period of time to build your endurance. Consistency is key.

On top of that, expect to hit a wall at some point.  Actually, scratch that! Expect to slam into SEVERAL walls that seem unbreakable – the key word being “seem.”  If you give up when the going gets tough, you’re never going to succeed.  Regardless of how talented or how smart you are, you’re going to plateau or straight up fail at some point.  I’ve hit rock bottom many times in my life, and I’m not afraid to admit it.  I’ve played concerts where I’ve forgotten lines of music, or worse, competed and totally bombed after months and months of excruciating preparation.

There’s nothing more disappointing than investing your blood, sweat, and tears into something only to have it explode in your face, but it’s all a learning experience and you need to embrace it as such. When things get hard, girl bosses push themselves harder.  They fall seven times and get up eight because behind that wall is a revelation that’ll help them get that much better. Always think long term, and stick with whatever it is you’re doing because things will get easier at some point.

3.  “A lion doesn’t concern himself (or herself in this matter) with the opinions of sheep.”

When I first started Sensible Stylista in 2011, people talked so much crap!  Fashion blogging wasn’t as common back then, and I had just started my doctorate at school so I felt pretty self-conscious about it all.  Friends would come up and tell me that so and so was saying this and that about my style or my writing, and it sucked.  It hurt my feelings to hear mean things, but it helped me develop a much thicker skin so I’m grateful for it all.

If you’re putting yourself out there, people are going to talk.  Be prepared for it and stay strong.  Keep your eye on the prize and focus on your goals because at the end of the day, negative words mean absolutely nothing.  Like Eleanor Roosevelt eloquently said, “no one can make you feel inferior without your consent.”  Fast forward 5 years, I’m so glad that I ignored the haters and powered through.  Don’t let anyone discourage you from pursuing your dreams!  You’re a girl boss so you shouldn’t give a damn what anyone thinks.

Social media’s great on so many different levels, but it can be discouraging and even depressing at times. Everyone’s putting their best foot forward without acknowledging their hardships out in the open so the grass almost always seems greener on the other side.  Girl bosses don’t deal with that bs though! They stay focused and only concern themselves with their own progress.  They also respect other people and their successes and realize that their accomplishments (however impressive they may be) don’t detract from their own.

Alright everyone, that’s it for today!  Do any of these quotes resonate with you?  If yes, which one/s and why? Do you have a mantra that you live by?  Comment below with your favorite quote.  And if you enjoyed this post, please take a second to share it with friends!  Until next time, friends.  Keep hustling!