Don’t ask me why I waited so long to get here because I don’t have a good answer for you.  I’ve heard amazing things about Chiko for years now, and I gotta say, their food goes above and beyond the hype.  And in case you were wondering, Chiko = Chinese / Korean so expect modern twists on traditional dishes that’ll wow your tastebuds. 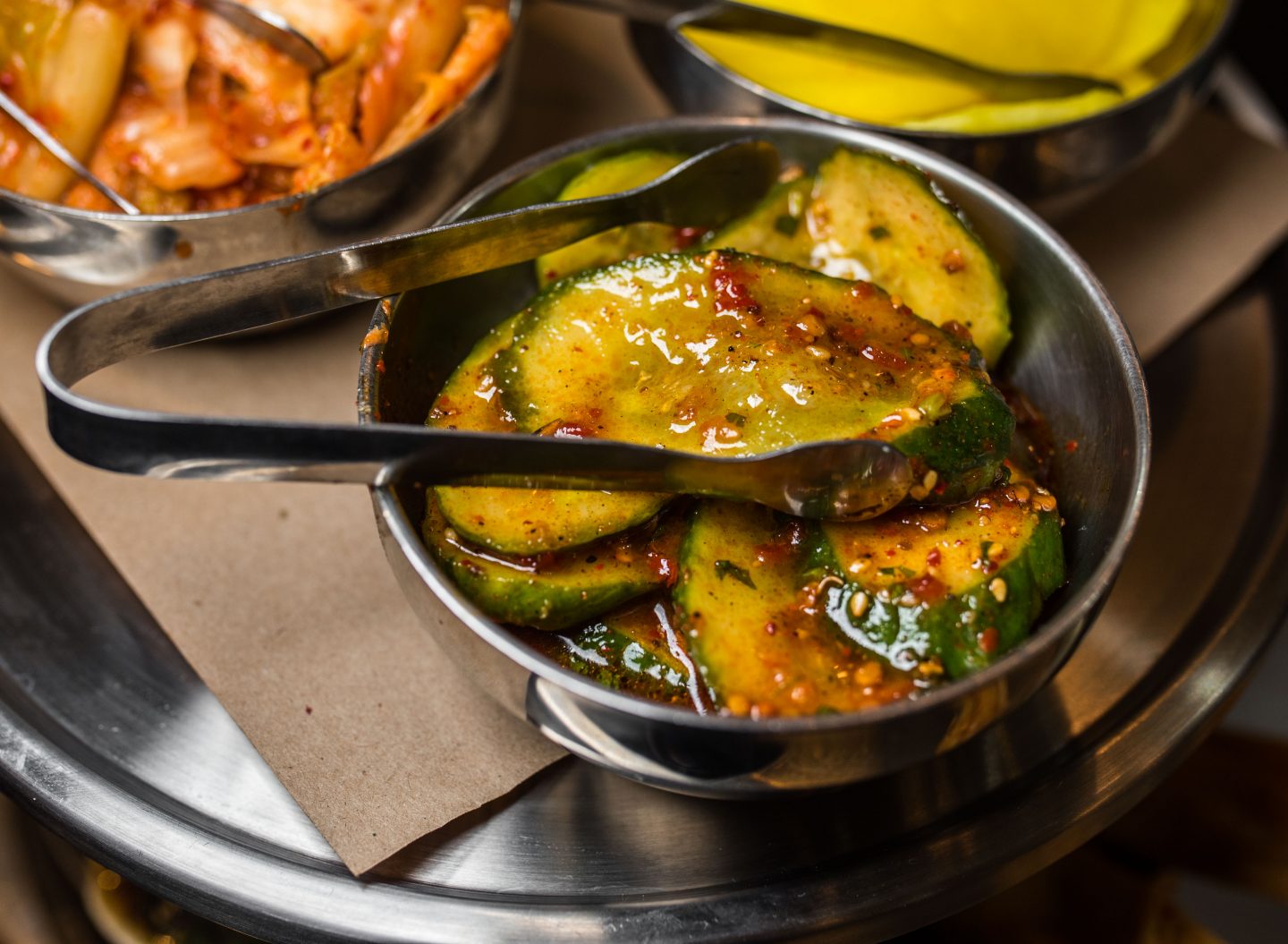 Now, Sensible Stylista’s all about glam living on a budget so I feel like I’d be doing you all a disservice if I didn’t tell you about their tasting menu, like I still can’t believe how ridiculously affordable it is.  I challenge you to find a quality course meal like this for $55 in any major city.  Yep, it’s pretty much impossible so good luck – you’ll need it. 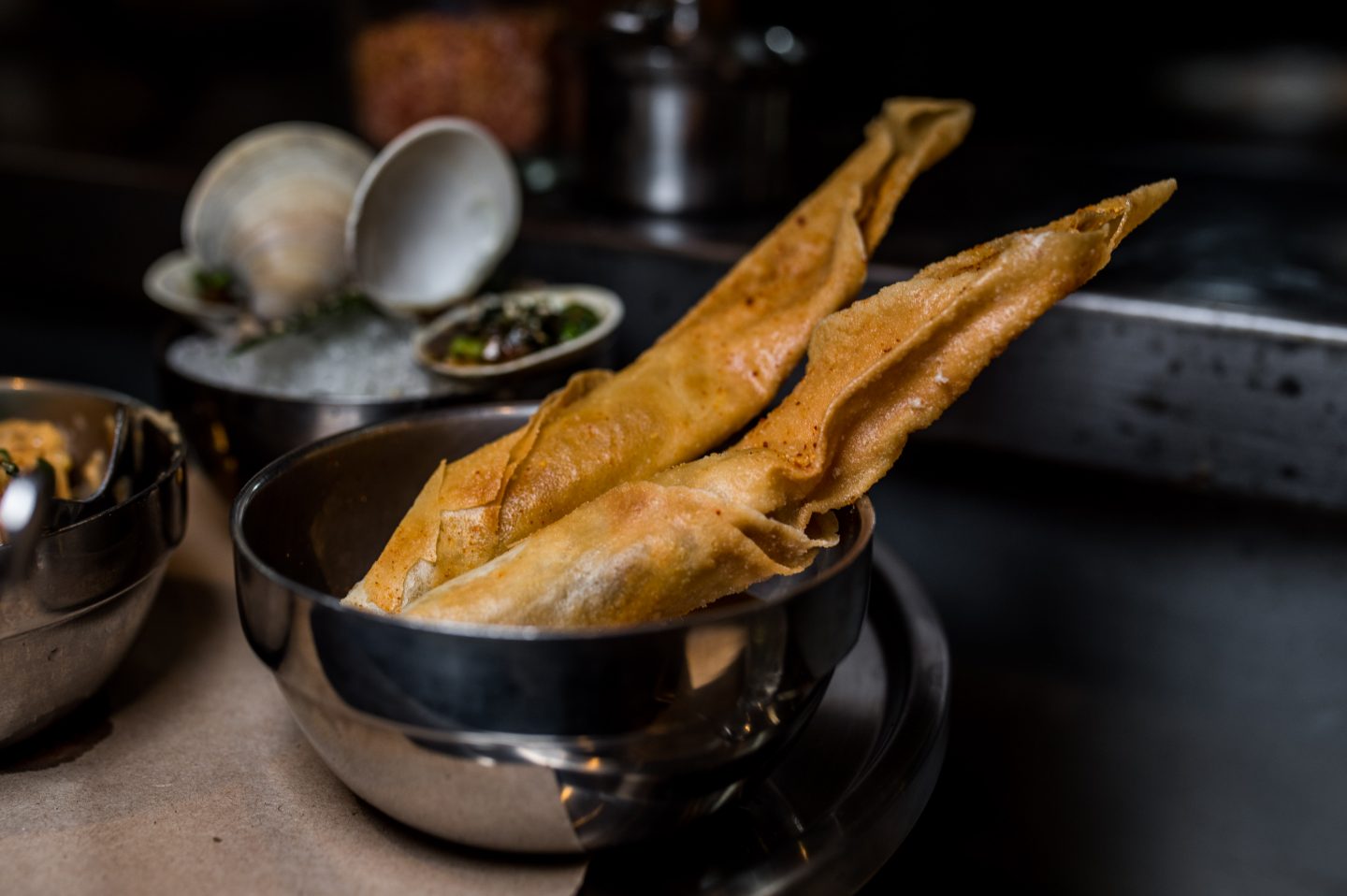 Chef-owners Danny Lee and Scott Drewno have two Chikos in the DC area – one in Capitol Hill, and one in Dupont.  I went to the former and was lucky enough to catch Chef Scott in action in their open kitchen.

They have two seatings available each night at 6 and 8:30 for parties of 2 and 4 so make sure you book a reservation stat.  The vibe’s super casual and hip so it’s a cool place to hang out with friends or have a chill foodie date with your SO.  The decor’s kind of industrial, and it feels very Brooklyn to me – I mean that in a good way though. 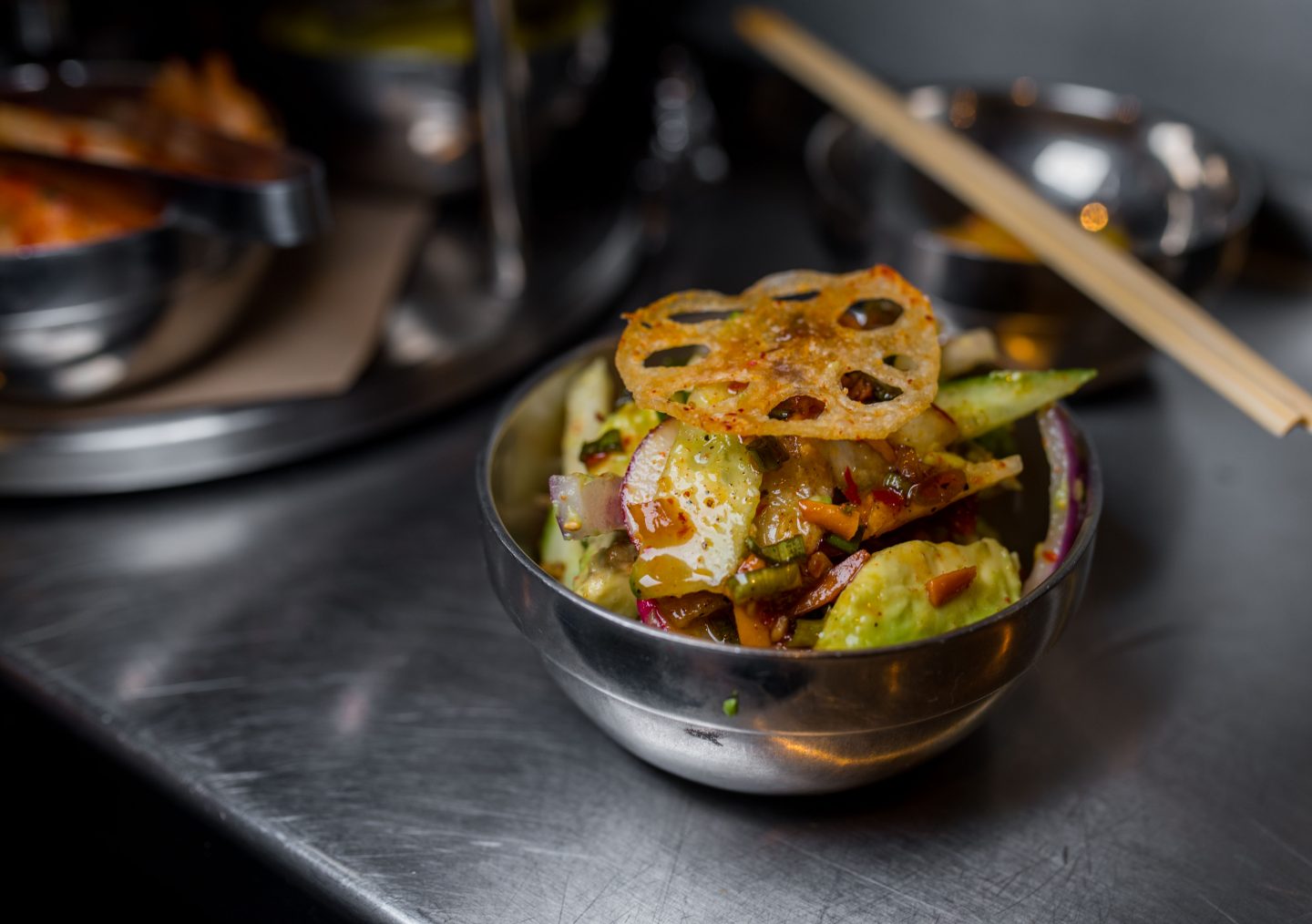 They currently have something going on called “Menu Wars” where customers get to decide which dish (the champ vs the contender) gets to stay.  I’m not even going to get into that though because I honestly liked everything I tried.  I had favorites for sure, but it was all tasty so you’re in for a treat.

Chef sent out a 6 pickles/snacks to start, and each one was delicious in its own right.  The Korean word for them?  Banchan, and these are side dishes that accompany every meal.  I got to try the napa cabbage kimchi, turmeric pickled daikon, chilled marinated littleneck clams, potato and egg salad, sichuan spicy cucumbers, and crispy chicken springrolls.  Out of the aforementioned dishes, my personal favorites were the clams, cukes and springrolls so definitely make sure to get one of each if you’re ordering a la carte.

The clams were heavenly, and I could’ve easily devoured 2-3 orders on my own.  The marinade reminded me of gaejang, one of my favorite Korean dishes, so it was a win for me.  If you’re unfamiliar with the dish, it’s raw crab that’s fermented in a magical soy sauce mixture.  The cucumbers were very flavorful, and they had a nice kick and crunch to ’em.  The springrolls were as crisp as can be, and I loved the accompanying Chinese mustard dipping sauce that came with. 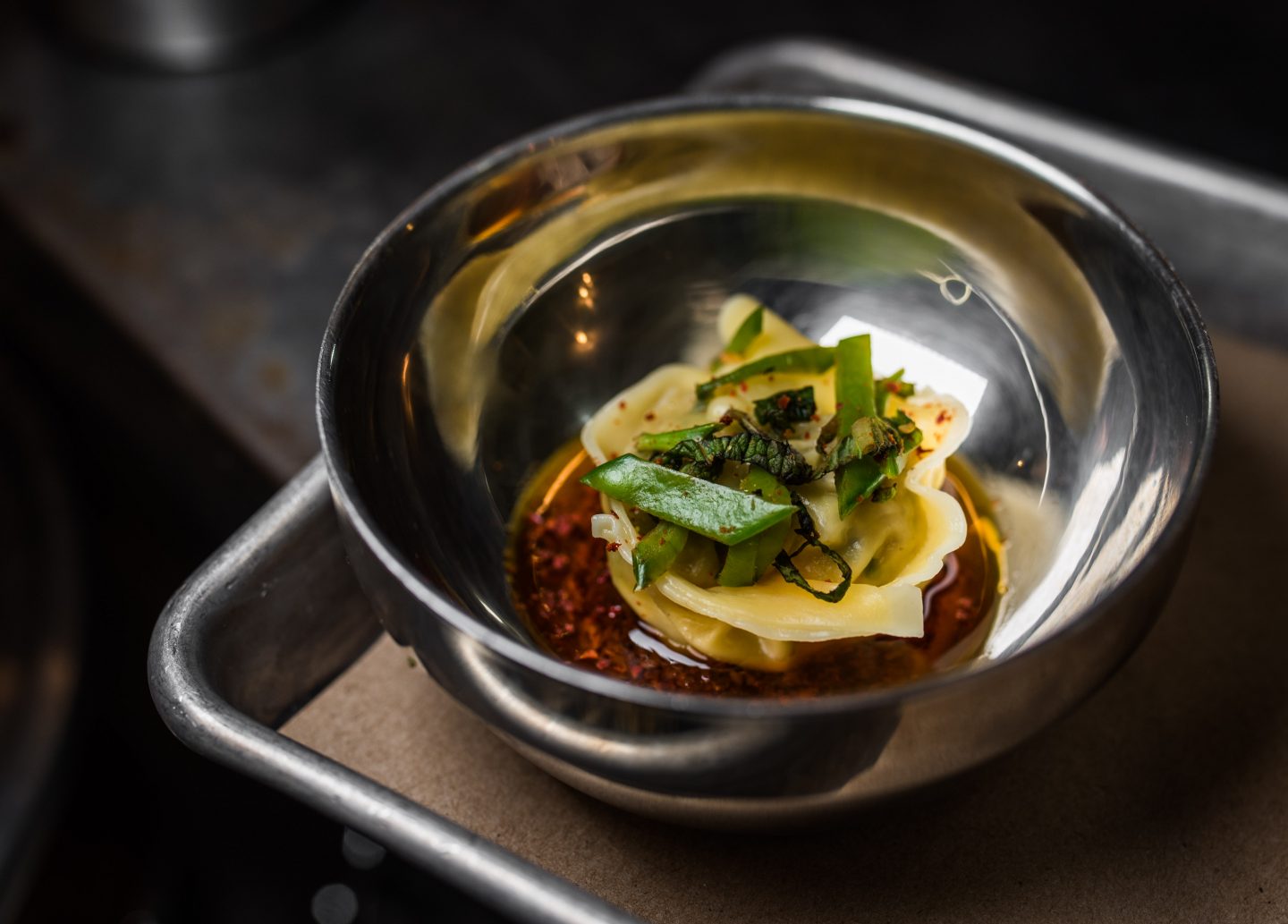 Meet Chiko’s garlic shrimp dumpling (above) and their pork and kimchi potsticker (below).  They were easily some of the best dumplings I’ve ever had.  The former came in a beautiful chili oil, the latter in a sesame dipping sauce.  I can’t even begin to tell you how much I loved these dumplings, like I’d honestly go back for these alone.  The filling tastes like love, and the texture of the wrapper was the perfect amount of chewy. 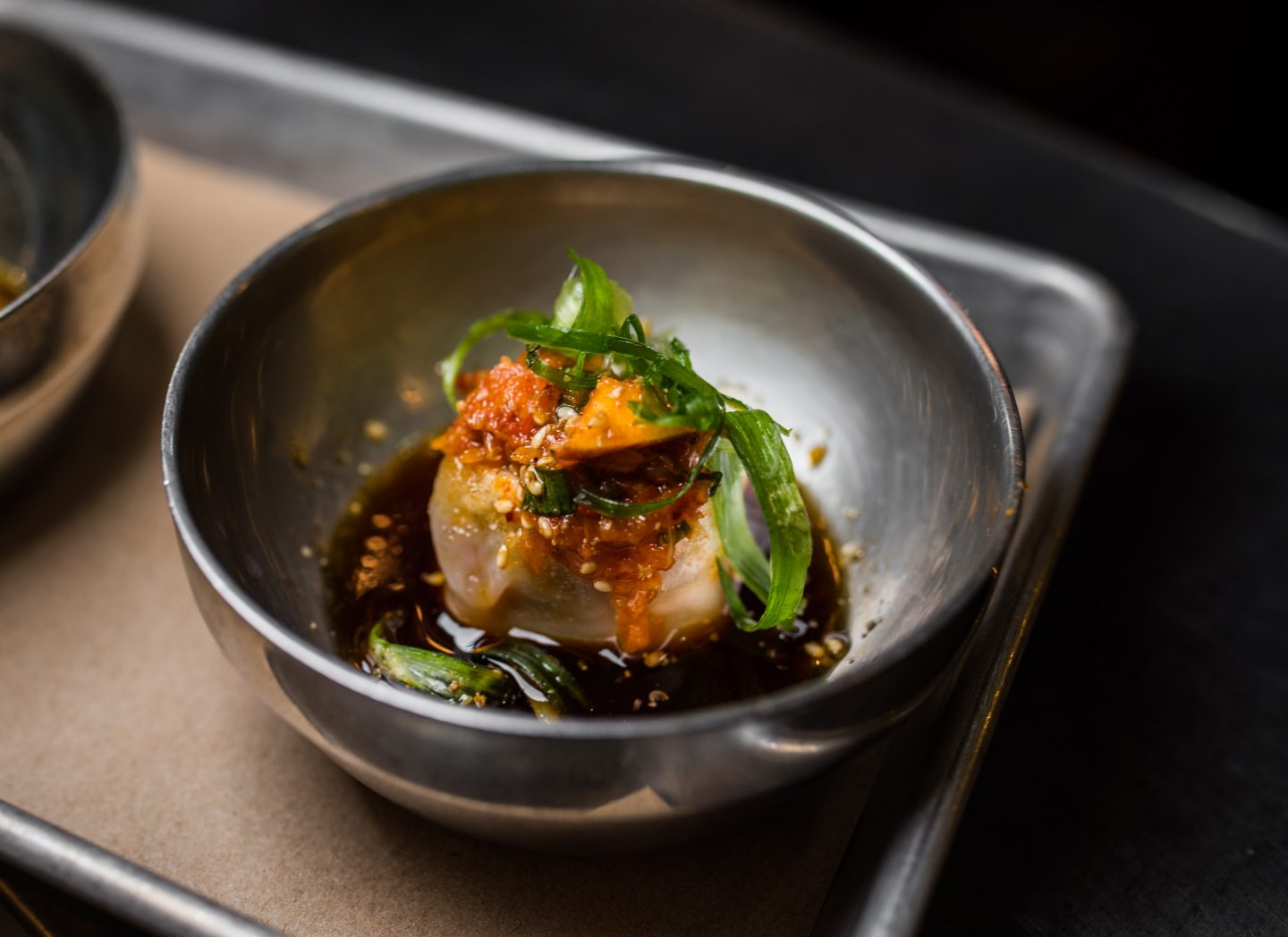 Then came steamed rice with furikake butter, and it was obscene.  Like, how do they expect me to eat regular rice now?  They’ve officially ruined it for me because all I want is this for every meal.  I’m kidding…but not really.  Real talk though, one of my favorite snacks growing up – and now, I’ll be honest – was ramen noodz with butter.  I know that sounds kind of ghetto, but don’t knock it ’til you try it.  I bring that up because a lot of people think rice with butter’s strange, but I’m telling you, mix that baby up, take a bite, and you’ll turn into a believer. 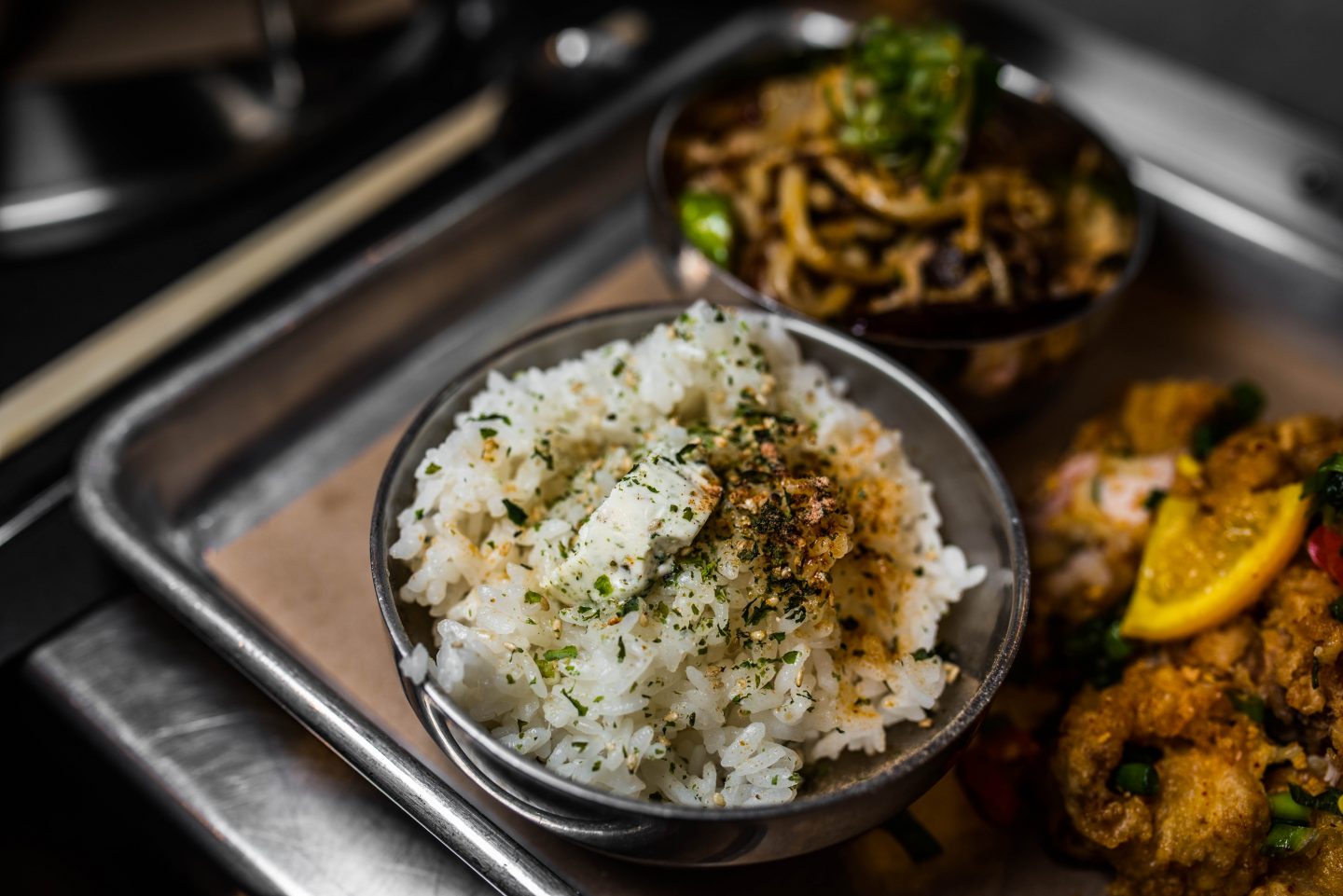 The rice was served with a generous portion of their orange-ish chicken, and I loved their take on this dish.  First of all, it came with sauce on the side, which was awesome because a., I don’t like it when my protein’s drowning, and b., it keeps the coating nice and crispy.  It also came with candied mandarins, which I thought was unique, and the sliced red peppers added heat, which was a nice contrast to the tangy sweetness. 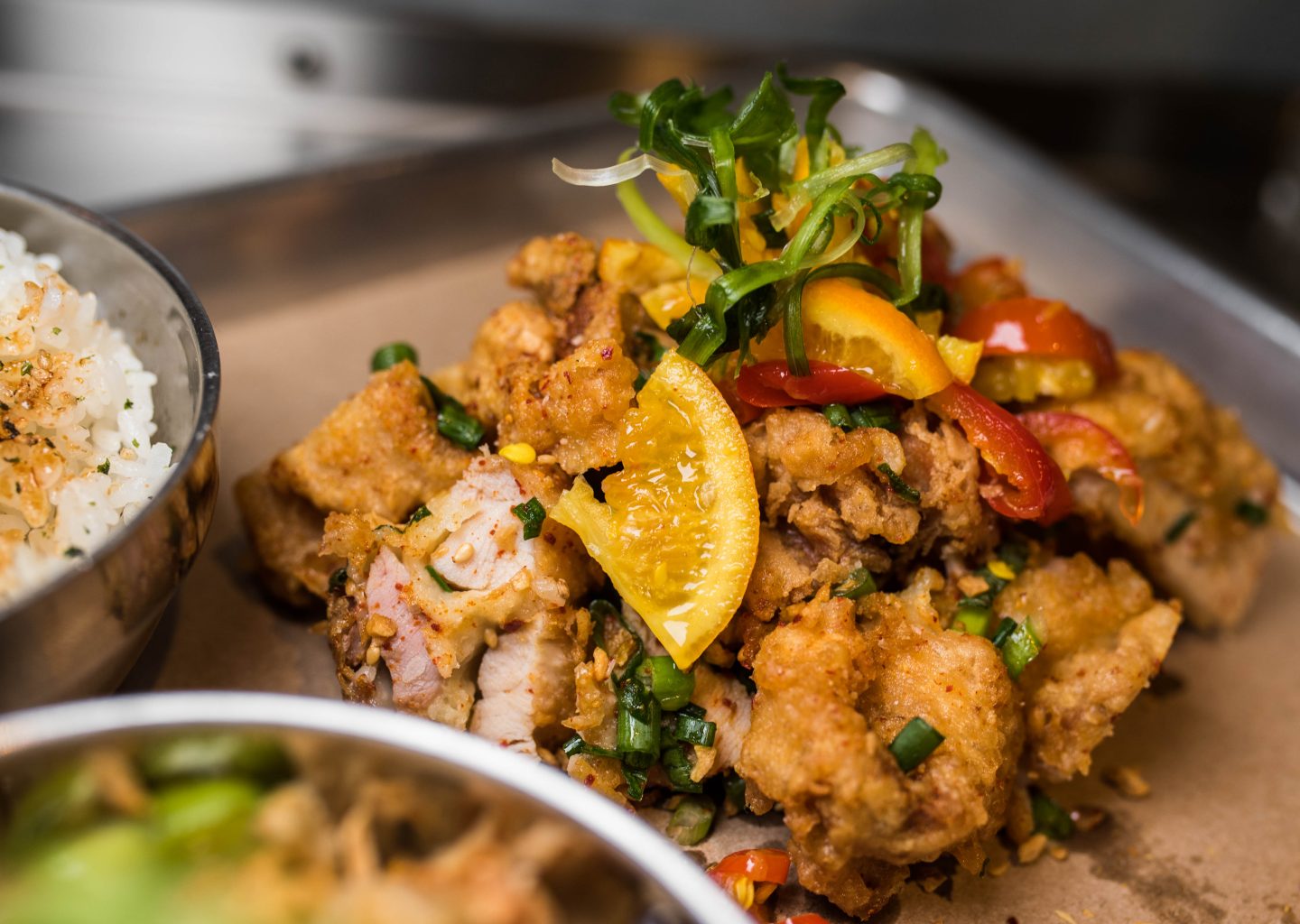 And last but not least, their cumin lamb stir fry.  These noodles were amazing, and I loved dipping the lamb in their house hot sauce.  Now, I can handle heat – like I’m talking 20 lines of Halal Guys red sauce on a platter – so trust me when I say they not playin’.  It’s not burn-a-hole-in-your-stomach kind of hot, at least not for me, but I have a feeling some of YOU will think so.  Tread carefully, and try a bit before drizzling it on. 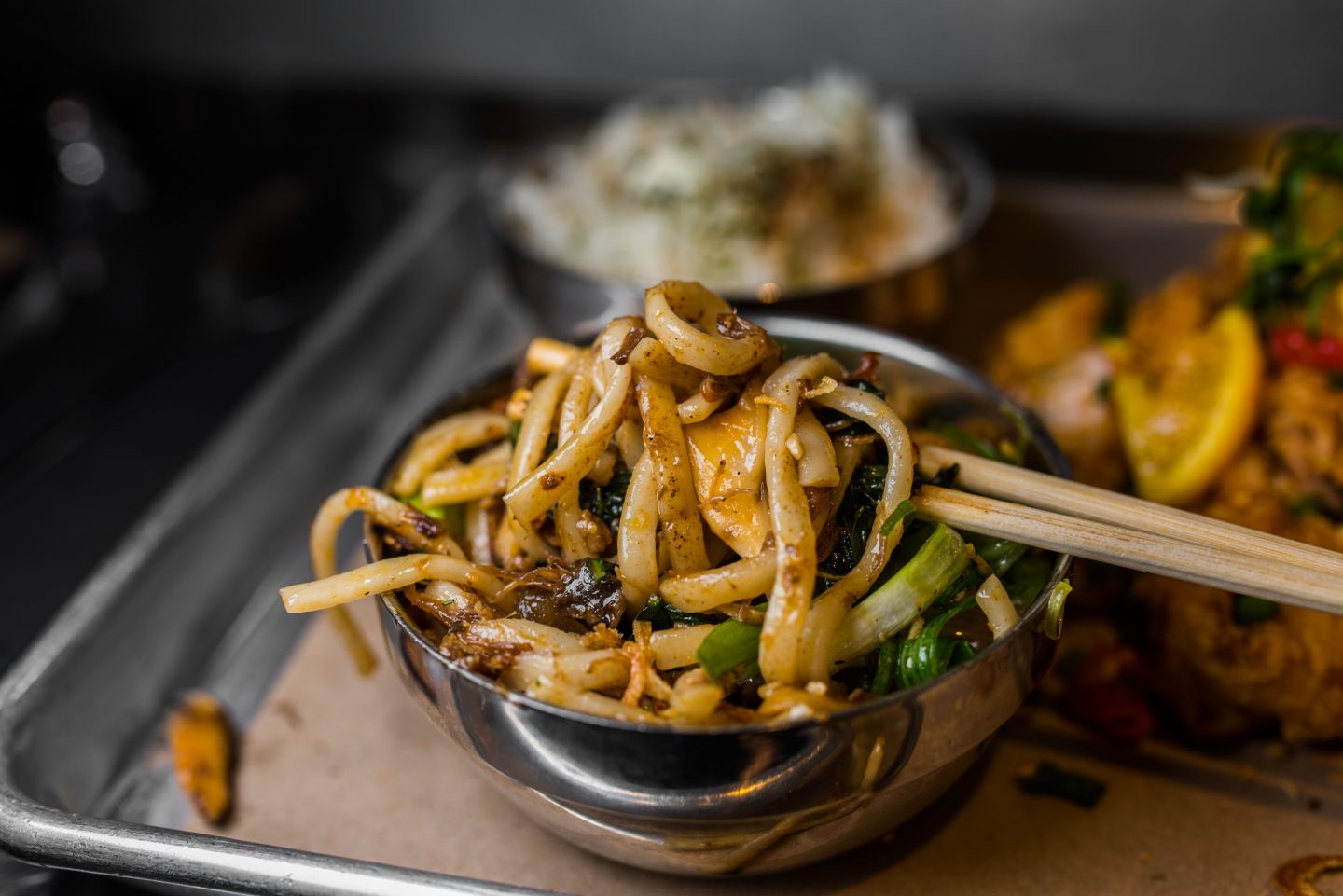 Alright guys, I hope you enjoyed reading all about Chiko’s nomtastic and very affordable tasting menu.  Regardless of where you live in the DMV, this experience is worth the drive so make sure you go check ’em out ASAP.  And FYI, they have a different menu at their Dupont location so make take a look see before you book a reservation.  For more on my DMV adventures – DC/MD/VA, not the Department of Motor Vehicles…or the DMZ, ha – check out this tab.  Until next time!  Happy eating, frands.